Lets take a look back at a little bit of history on where the 1970 Kawasaki F5 350 Big Horn came from.  In this video I go explain a bit of history on the bike from the stand point of where motorcycling was at in 1970.  I will take a look at some of the ,unique for the time, features.  Depending on who you talk to and depending on their bias's people love and loath the Kawasaki Big Horn but what ever your opinion it can't be denied that the F5 Big Horn was the Japanese first entry into the "big bore" street legal enduro (or sometimes called scramblers) beating the Yamaha RT1 360 by over 6 months.  The F5 Big Horn was a lofty attempt at a true do-all bike that could be adjusted and customized to fit the riders needs weather that be commuting to and from work on the highway, doing some light trail riding, to even stripping it of its easily detached lights and entering it into a desert race.  It also was one of only a handful of bikes to feature a CDI (capacitor discharge ignition) system of the time, a first on a "dirt bike".  Some things it did well while others it didn't do so well, but one thing for sure it helped launch the public perceptions of what a motorcycle "could" be when given options for adjust-ability.  It was an exciting time in the early era of the exploding trail and off road motorcycling.  The F5 Big Horn helped develop the Japanese dedicated offroad and motocross machines.  Machines like the F8 Bison and motocross/offroad only version F81M (improvement over the rare limited production F21M) have their roots with the Big Horn and share lots of parts.  According to Cycle, and Cycle World magazines race prepped Big Horns competed well in prestigious desert races of the day.  A September 1971 issue of Cycle magazine entered a stock Big Horn in Pasadena's Motorcycle Club's 25th annual 500 mile Green Horn Enduro.  The bike finished the Cycle staff rider didn't (he broke his toe on a rock) a replacement rider finished the race on time on the injured staff riders bike.  Pretty impressive for a relatively new largely untested machine.

Carburetor cover and control cable boot are unique to the F5.  F5A and later (F9) used a different cover and boot that improved sealing.

F5 had Painted graphics. Later F5A and F9 used vinyl decals much like other manufacturers.

Handlebar is chrome and bend is unique to the F5,  The F9 used a different bend and came in black
.
Speedometer and tachometer are unique to the F5.  F5A gauges had rubber hoods to reduce glare, F9 the gauges changed again.

F5 chain guard is silver.  The F5A is black, the F9 changed the design.

F5 and F5A featured the Hatta forks, F9 changed to the more conventional forks similar to the F11 (1973 250cc) but still featured the adjustable pre-load.

Foot pegs are rubber and round unique to the F5, later bikes had flat style rubber.

Muffler heat shield is chrome on the F5, F5A is black both require optional bolt on spark arestors, complete redesigned muffler (with built in spark arestor) is featured on the F9

Alloy wheels were featured on the F5 and F5A,The F9 had chrome steel wheels.  The alloy wheels were soft (but light) and had a groove that held mud when riding in muddy conditions.

Lightweight aluminum fenders on the F5 and F5A, The F9 changed to steel for durability, also tail light design and style was changed (heavier)

Speed Kit or "Power Pack" available only in 1970 but parts will fit all years.  Combined parts increase performance from claimed 33 hp to 45 hp (Big Horn exclusive) This is similar to Yamaha's GYT kit(s) for their specific bikes (eg. DT1) 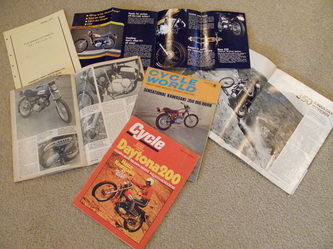 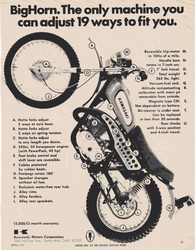 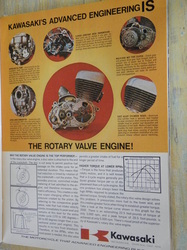 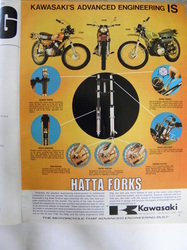 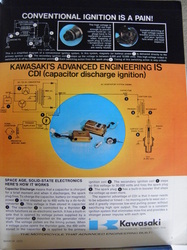 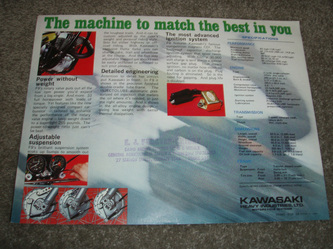