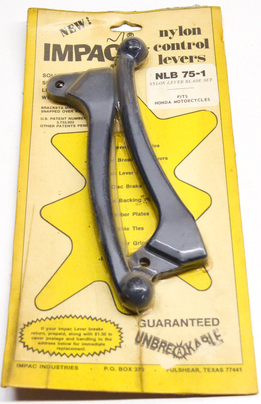 The explosion of motorcycling in the US in the late 60's and early 70's seemed to breed numerous aftermarket startup companies aimed at making improved or upgrade parts for various types of motorcycles.  Some of these companies are still around today. There was one company that was a blip on the radar screen trying to grab some market share of this ever growing segment of aftermarket motorcycling products.

Before ASV (ASV Inventions), Sunline & ARC fold-away levers came on the scene in the late 90s there was a small startup company in Houston Texas that set out to prevent DNF's from broken control levers way back in the early 70's.  The company was Interstate Sports Incorporated but better known as IMPAC Industries founded by Virgil P. Tripp.  A small injection molding company that in my research only made a few products shown here.

The company was founded in March of 1971 according to Texas Secretary of State. Later a patent was filed in November 1971 for 3 different types of motorcycle control levers.  Hand Brake & Clutch, Gear change, and foot brake levers are cited on the patent sheet.  IMPAC (as Interstate Sports Incorporated) would begin producing the levers sometime in late 1971 as evidenced by early levers being molded with patent pending.  Later versions of the levers would have the actual patent number 373392 molded in, denoting that these were made after the patent was granted.  The patent was granted on May 5th of 1973 by the US Patent office.  IMPAC could now market and sell their products without fear of copycats in the market place. 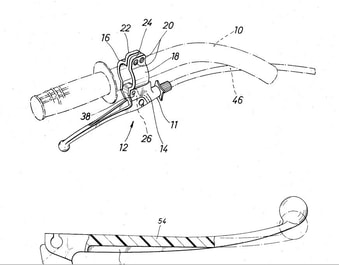 Clutch/Brake lever US Patent drawing (click for larger view)
The brake & clutch lever featured a typical style of lever for the time.  A long slender body with a ball end.  The lever & perch were made out of a pliable nylon resin formed into the typical shape with one notable difference.  The backside of the lever featured a flange or "spine" that tapered towards the ball end of the lever.  This design feature is what allowed the lever to have the rigidity near the pivot point, with a metal sleeve where the bolt pivots on, and be flexible out towards the end where most impacts with objects will occur.  From the patent documents it seems a lot of testing and refining went into finding a good balance of flexibility and rigidity to maintain what they deemed satisfactory "feel" and control under normal use. 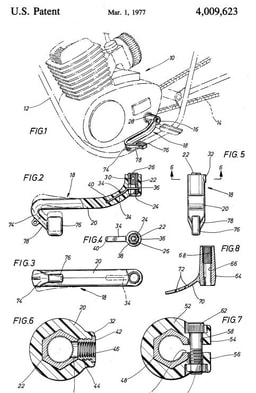 Gear change lever US Patent drawing (click for larger view)
The gear change lever would have its patent issued in 1977.  That said this product was probably on the market sooner as the patent was filed in 1974.  Seeing how the brake & clutch lever essentially followed the same timeline & demonstrated the same overall goal.  As seen from these patent drawings the gear shift lever features an internal hexagonal insert with splines and a stub of a lever attached to the splined insert.  Then a pliable nylon resin type plastic is formed over the metal assembly to create the impact resistant gear shift lever. It would seem this was a way to improve the shifter levers feel while still achieving the goal of a lever that can bend and fold if it came in contact with a rock or the ground in a tip over.  Quite a unique idea for the time. 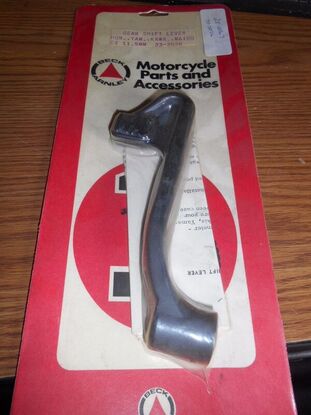 IMPAC shift lever in Beck Arnley packaging
IMPAC's products were available for direct mail order purchase as evidenced by advertisements in various motorcycling magazines of the mid 70's.  Also see the above picture in factory packaging.  They also sold their various models of shift, brake, and clutch levers through global sourcing distributor Beck Arnley.  Thus it is possible that these levers could have been available through various independent motorcycle dealers that choose to stock these replacement levers.  Beck Arnley was, then, a large motorcycle and foreign nameplate auto-parts distributor and importer.  Beck Arnley would exit the motorcycle parts distribution in 1979.  This might explain why the levers would vanish from the market as this might have been the companies main distribution channel.

IMPAC Industries (dba Interstate Sports Inc.) would be dissolved in 1978 according to Texas Secretary of State filings.
A modern day equivalent 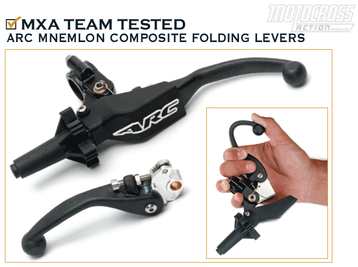 ARC mnemlon composite foldable lever
​In the modern day it is interesting that ARC Lever company, the leading manufacturer of folding style levers, developed a composite lever (in the mid 2010's) to be used in conjunction with their foldable design.  Was Bob Barnett influenced by this previous attempt at a composite unbreakable lever?  I couldn't find a link between patents, so it may be just a coincidence as Bob would have been pretty young at the time. We may never know.  One thing is for sure the ARC composite (Memlon) lever is a spiritual successor and evolution of the IMPAC lever's original goal.
What the levers are like to use in the real world
As it would be.  I am fortunate to have a few of their products installed on a couple of my vintage bikes.  I can attest to their durability and quality of molding.  They have a very good fit and finish of a mass produced part.  The splines on the gear shift lever are very accurately molded and machined in that they don't slip when tightened properly.  The construction is of some sort of nylon resin, pliable plastic, that even after 50+ years, it has not gotten brittle or shows any signs of degradation.  As mentioned in the below instructions it would seem that the part is made of some mixture of various plastics.  It states that only the front 4 inches of the shift lever can be bent or molded by dipping into boiling water to create needed frame clearance.  This suggests to me that the composition of the plastic or resin used has specific properties to allow some reforming and thus impact resistance.  Which is the feature of the products.  They bend but don't break and then return to their original shape.

And here in lies one possible reason why this product probably didn't catch on.  On paper a lever that can bend, twist and move in a crash or hitting an object (like a rock) without breaking would be a godsend at a time when factory alloy levers were brittle and were the source of leaving you stranded sometimes over a minor tip over.  In practice however, the IMPAC levers do not have enough rigidity to give very good feedback to the thing they are connected to.

Brake levers:  Using IMPAC levers make front brake modulation feel vague.  While the lever is stiff enough that it does the job, there is definitely a feel of flexing or springy-ness when trying to finess the front brake.  Much of the feel is lost before lock up.  Remember this is on bikes with drum brakes.  Hydraulic disc brakes would be a while before they were common on dirt/enduro bikes

Clutch levers:  Very much the same as with the brake lever, however since the clutch is usually an on or off affair it is much less noticeable.  However bikes with overly stiff clutch springs or poor clutch actuator designs some flex would occur.

Gear change lever:  While this was a great idea and probably kept a lot of shift shafts and transmissions from damage.  The same rule applies here.  With thick soled motocross boots the lever is almost invisible.  As in you almost can't feel it.  There is a spongy-ness to its use, it also is hard to feel if the gears are changing.  Depending on the bike, neutral can be impossible to find as the flexible nylon plastic dampens the positive detents typically felt while using a traditional steel or aluminum lever at the time.

Overall the product does/did what it claims, however at the cost of loss of feel in the controls.  As time marched on, various foldable levers were developed for the brake and clutch.  Gear change levers with foldable tips would begin to come standard on dirt bikes, all but eliminating the problem of broken or bent shifter hardware.  IMPAC did however offer a lifetime guarantee that if you ever broke one of their products they would replace it for *free.

I wonder if the replacement guarantee is still valid?
Instructions for installing the IMPAC unbreakable gear shift lever 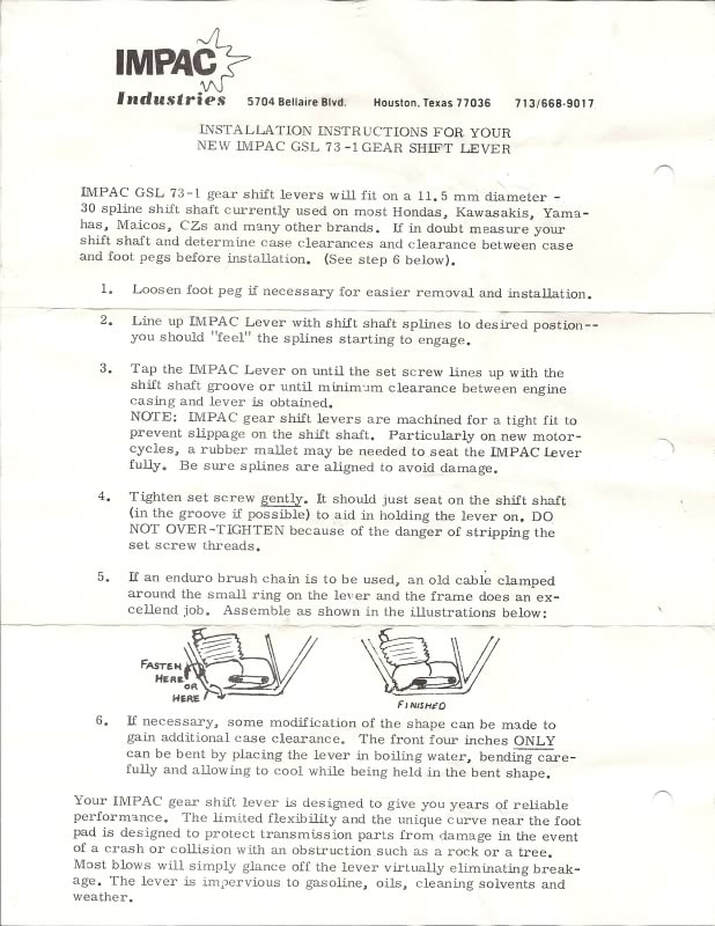 IMPAC GSL 73-1 gear shift levers will fit on a 11.5 mm diameter - 30 spline shift shaft currently used on most Hondas, Kawasakis, Yamahas, Maicos, CZs, and many other brands.  If in doubt measure your shift shaft and determine case clearances and clearance between cause and foot pegs before installation. (see step 6 below).

1. Loosen foot peg if necessary for easier removal and installation.

2. Line up IMPAC lever with shift shaft splines to desired position.  You should "feel" the splines starting to engage.

3. Tap the IMPAC lever on until the set screw lines up with the shift shaft groove or until minimum clearance between engine casing and lever is obtained.
NOTE: IMPAC gear shift levers are machined for a tight fit to prevent slippage on the shift shaft.  Particularly on new motorcycles, a rubber mallet may be needed to seat the IMPAC lever fully.  Be sure splines are aligned to avoid damage.

4.  Tighten set screw gently.  It should just seat on the shift shaft (in the groove if possible) to aid in holding the lever on.  DO NOT OVER-TIGHTEN because of the danger of stripping the set screw threads.

5.  If an enduro brush chain is to be used, an old cable clamped around the small ring on the lever and the frame does an excellent job.  Assemble as shown in the illustrations below: (see diagram)

6. If necessary, some modification of the shape can be made to gain additional case clearance.  The front four inches ONLY can be bent by placing the lever in boiling water, bending carefully and allowing to cool while being held in the bent shape.

Your IMPAC gear shift lever is designed to give you years of reliable performance.  The limited flexibility and the unique curve near the foot pad is designed to protect transmission parts from damage in the event of a crash or collision with an obstruction such as a rock or a tree.  Most blows will simply glance off the lever virtually eliminating breakage.  The lever is impervious to gasoline, oils, cleaning solvents and weather.
Below are some different styles of the IMPAC unbreakable lever that were available 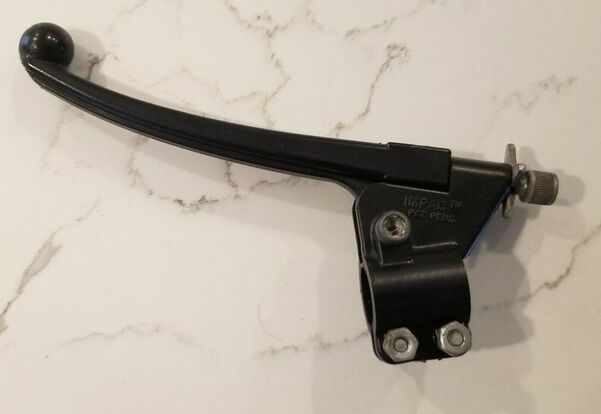 Example of the standard lever (early version)
If you are curious to read the official US Patent paperwork I have provided them below.  It is quite interesting.