Yes, that odd little device bolted to the bottom of the crankcase like some kind of tumor.  If you have ever wondered what the aluminum part with 4 screws and a hose nipple was on the bottom of the engine, well that is what is known in the manual as the drain pump.  This little thing, unknowingly, can cause all kinds of havoc in tuning and even engine damage if left unchecked.  So what is it and what does it do?  Read this if you are un-familiar with rotary valve engines.

The short answer is, a little diaphragm that aids in clearing the carburetor chamber of fuel or water that may end up in there from various means.  This device is almost in-explicably only found on these models of Kawasaki rotary valve bikes.  The F5, F9 (Big Horn 350cc) and the F7 175cc.  To my knowledge this kind of thing was never implemented on any other 2 stroke motorcycle by any other brand.
"The drain pump attached to the outside of the crankcase, which is used in Models F5 and F7, has been developed and incorporated to discharge gasoline and oil which may accumulate inside, the carburetor chamber.  Thus, the possibility of unwanted gas and oil being sucked into the carburetor and engine is minimized.  The following figures are the parts breakdown and the cross section of the drain pump." - Kawasaki Factory Service Manual 1971 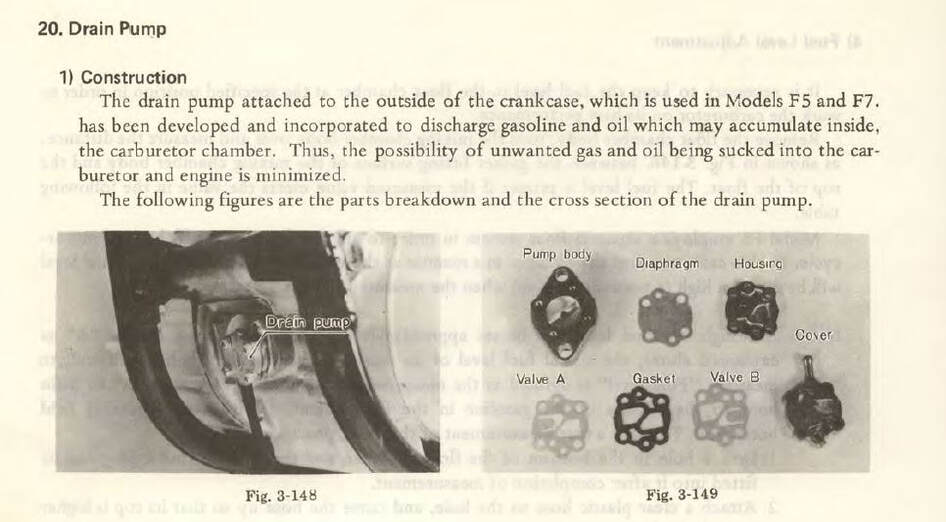 When the piston moves up in the cylinder making the crankcase pressure negative, the diaphragm between the body and the housing is pulled in, consequently, the inlet reed valve "A" on the suction side moves in the direction of the dotted arrow, which results in sucking the contents inside the carburetor chamber into the chamber "C".  At the same time the exhaust reed valve "B" in turn closes in the direction shown with the dotted arrow and prevents any air from being sucked into the chamber "C".

When the piston moves down in the cylinder, pressurizing the crankcase, the diaphragm is pushed out.  Then, the exhaust valve "B" opens the passaged to the exhaust hose, releasing the contents of the chamber "C".  The inlet valve "A" shuts off the suction passage, moving the in the direction of the arrow mark. - Kawasaki Factory Service Manual 1971 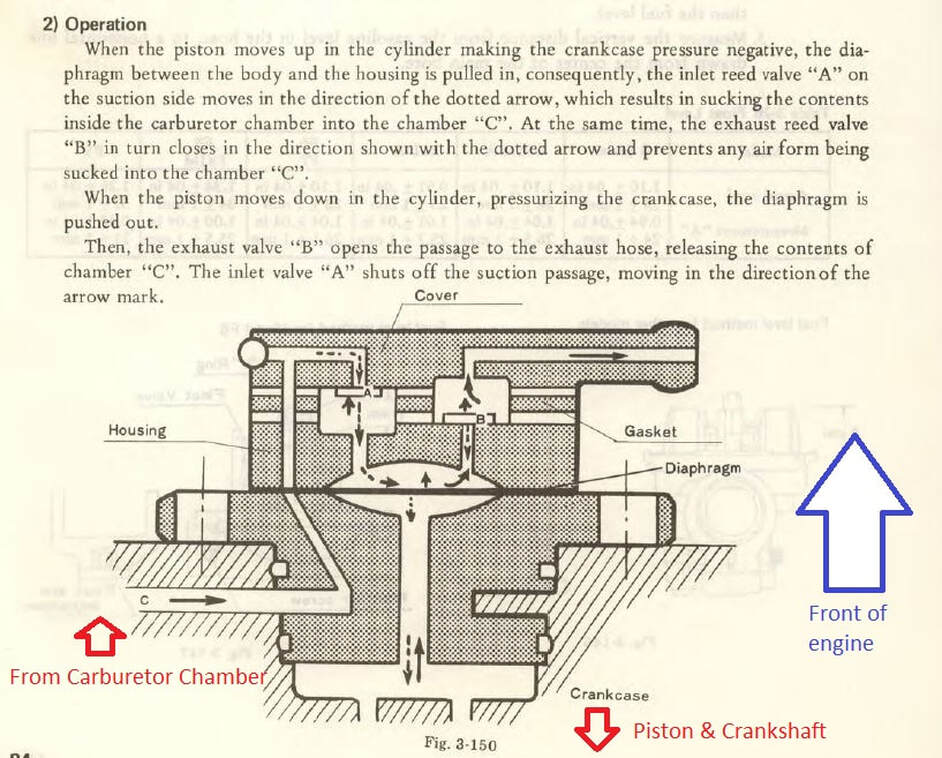 In a nutshell the pressure changes of the piston going up and down in the crankcase creates the back and forth movement of the diaphragm that in turn creates the vacuum to evacuate the chambers "A" and "B" in the diagram.  Furthermore the gaskets create one way valves to make it all work.  From the factory this probably worked just fine, but now 50 years later, the materials these were made of are now deteriorated and in the best case they are stuck and at least making a seal, at worst they are ruptured and thus the most crucial sealing surface, at the diaphragm will create a direct air leak to the crankcase. Also the 2 O-rings can be a failure point as well, letting air creep around the side of the casting or in the case of the bottom (nearest the crankcase) it can let air in from "C" the carburetor chamber.

Why is this bad?  This directly effects jetting for one, but more importantly it creates an extreme lean condition that can seize pistons.

To remedy this problem is to defeat the "drain pump" entirely.  Some may say to try and rebuild it by cutting new gaskets or replacing the entire unit.  First, the gaskets are a bit complicated, however someone (more capable than me) with some design knowledge and a laser cutter could make replacements out of similar materials.  The gaskets would have to be thin and flexible to create the proper valving to work.  Second, NOS replacements are very hard to come by, and when they do they are very expensive.  Used ones are probably no better than the one you have.

Disabling the drain pump can be done simply by putting a bit of RTV silicone into the hole to plug the passage directly into the crankcase.  Then put the old pump back in for a factory look.

The F9 (which is a more developed version of the Big Horn) has a similar drain pump, but Kawasaki revised its design just a little bit.  In general it still operates very similar, and has the same Achilles heal (see above symptoms).  The main difference is that Kawasaki now has the "pump" functioning as a check valve to evacuate the carburetor chamber via a vent pipe on the bottom of the clutch/primary cover, just below the oil pump. (Click for larger view)
Below is the difference in the F5 versus the F9.  The F5 below features a drain bolt and screen that filters debris that could plug the passage "C" in the factory manual.  This is where it terminates.  The 175cc F7 also shares this same design although the carburetor cover and clutch cover are different. 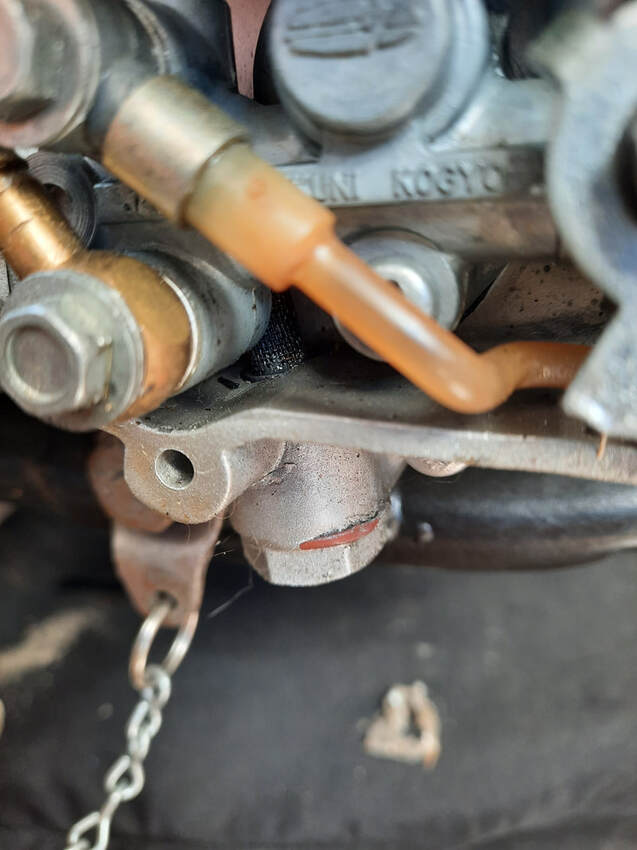 1970 F5 has drain bolt and filter screen, this is where passage "C" terminates 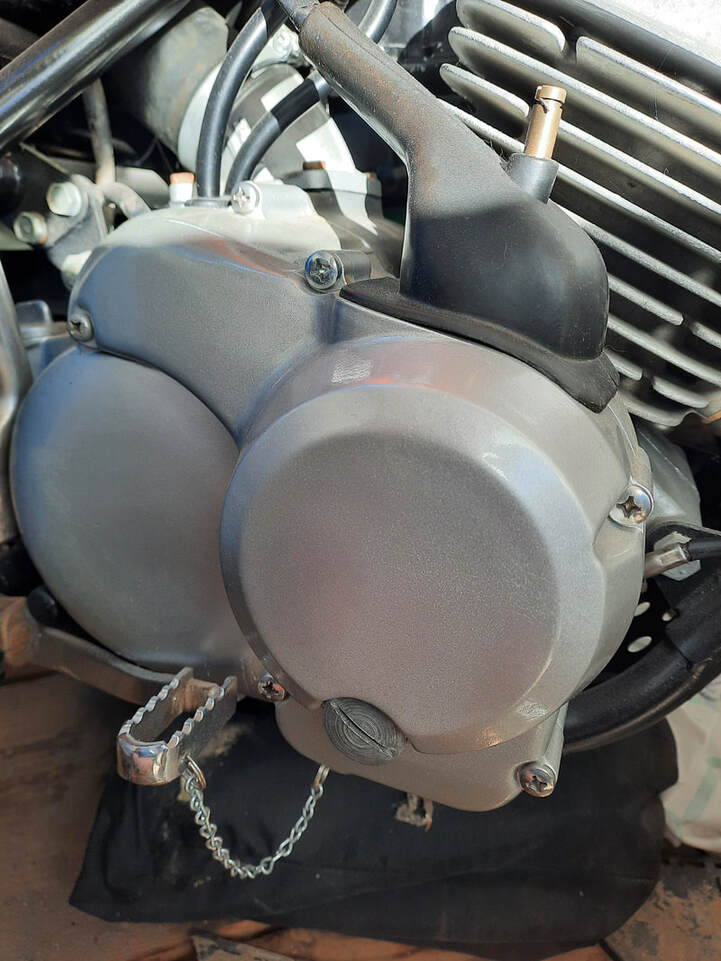 1970 Kawasaki F5 350cc Big Horn, Click to View more!
Fun Fact!  Kawasaki offered a "Speed Kit" also known as the "Power Pack" (in the marketing literature) in model year 1970 only.  It came with some trick factory provided performance parts designed to increase the output of this engine for racing applications.  You can see the entire manual and parts breakdown HERE
Questions or comments?  Leave them below!