Tips for long term storage of your machine 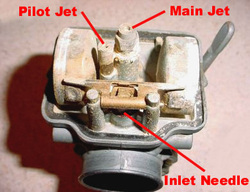 Fuel left in the system will result in this...
Going into hibernation, long term storage of your motorcycle or atv.


For most of us living in the continental US the riding season is coming to an end or at least becoming abbreviated with the changing weather. This brings up a common occurrence. What to do about storage and how to go about it? Its unfortunate that most of the offroading public just shut the fuel tap off and push it into the garage/shed and start piling the holiday decorations on to of their machine to only then try firing it up in the spring finding that (A) it doesn’t even turn over (B) turns over but does not start or (C) turns over starts but runs for only a few seconds or very poorly.

Not to mention other things like flat tires, mice eating the wiring or seat and other upholstery and even broken parts that never got fixed last season. This article will try to go through a few basics for some long term storage for both those that have to store their machines for 6 months or more and the ones that can ride sporadically throughout the “off” season.

First we should define what long term storage is. One thing to note is the phrase “long term” can be subjective as some may consider it to be 3 months or more while others consider it to be 1 month. I am of the latter, I believe if your machine will sit more than 1 month at a time at least some precautionary steps should be taken so the machine will (A) fire the first time (B) run well and in at least an acceptable state of tune and (C) be just as reliable as if you were riding it at least once a week.

Lets go through some recommendations of long term storage starting with the most important and crucial items and work the way down to the least important.

Fuel system:  By far the most important and also the most vulnerable for long term storage in any vehicle for that matter.  Modern gasoline (petrol) is made up of many compounds so light, some heavy, thus storage outside of a sealed container the lighter elements are allowed to evaporate into the atmosphere and leave the heavy ones behind.  This evaporation leaves a gummy varnish behind and in turn clogs the small orifices in the fuel system.  Regardless of the type of system (EFI or Carburetion) poor quality fuel degrades the internal parts and causes poor performance.  To combat this there are a few things you can do.

First and the best is to completely drain the system of all fuel (tank and all).  Second would be to add a fuel stabilizer and run as much fuel out of the system as possible.  If your ATV or motorcycle has a steel tank some extra precautions should be taken if using the latter.  Steel tanks tend to “sweat” during wide temperature fluctuations, in this case some gas line antifreeze/water remover should also be used both when putting the machine away and before initial start up.

Electrical system: Depending on the type of machine you have you may not have to do really anything to the electrical system.  If your machine has no battery there is really nothing you will have to do other than maybe a spark plug change just to have a new spark plug in for start up.  If you do have a battery some maintenance is required.  First remove it from the machine and store it in a cool (not freezing) place with a float charger on it.  If its a flooded acid type battery make sure each cell is properly filled before hooking up the charger.  Gel or spiral core style batteries do not require this maintenance, just a float charge for storage.

Lubrication:  This can be many areas depending on the type of engine, transmission and drive line your machine has but here are a few to take note of.  Engine oil should be changed before storage.  Combustion contaminates the oil with acids and other crud that can scar and oxidize the bearing surfaces over time, the similar is true if the transmission is a shared sump.  If you machine has a chain for a final drive coating with a light dressing of 90W gear oil will prevent rusting and damaging the rollers.  Also remove the spark plug and fog the cylinder with a good penetrating oil or cylinder fogging oil to prevent stuck rings and condensation.

Tires:  If possible putting the machine up on blocks with the tires completely unloaded is best as this will reduce damage to the sidewalls and radial cords (if a radial tire) and prevents flat spots.  But if putting up on blocks is not practical or available over inflating the tire is the next best thing.

Well it goes without saying that any broken parts or mechanical issues should be taken care of BEFORE you put the machine away so it will reliably start and run when you want it too, it also prevents you from forgetting that something that could be safety related that needs fixing.

Last but not least is its a good idea to cover the machine to protect the entire machine from dust and debris that might fall onto the machine. Also putting some moth balls or a dish of Pin-Sol under the machine will keep unwanted critters away from the machine and nesting in all the nooks and crannies. Be cautious if you have pets though.

There you have it some basic guide lines to ensure your ATV or motorcycle starts first time when the riding season begins again.