Sit back and enjoy the lighter side of The Junk Man. This page contains videos and films from past and present projects that don't fit anywhere else on this site.  These are pet projects and experimental videos that I have made in my years of making various types of videos.  Some are good and some are bad, however I wanted a place to share them.  There also may be other content posted here like behind the scenes or rough drafts of ideas that I have or had that relate to certain videos.  This page will be an outlet for some of my non-conventional ideas and videos that aren't necessarily related to cars and motorcycles.

tHE little engine that could ... kill 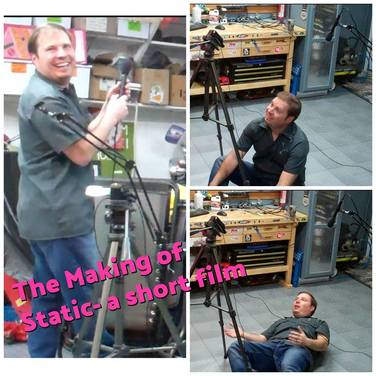 Remember to have fun
About this project:
​
This project started life as an idea for a Youtube Subscriber milestone and a Youtube anniversary video.  I kicked around many ideas for a video with concepts like, audience participation, give-away, or the often bland thank you style video.  None of those ideas really sparked my interest, other than getting a video out for the sake of making a video because of an arbitrary event. That is when an the idea of a scripted comedy or drama came about.

Making a movie or film style video has been something that I have wanted to work on for a long time.  Oh, not that I hadn't made some videos in the past.  I had made several scripted home movies in the 8mm film & VHS era, but these are shot on shitteo quality, and the age of the tapes/film have not helped either.  You can learn a little bit about my history with the type of equipment I was using by reading this BLOG post.  However it was some of those old crappy videos (and films) that gave me an idea for Static.  Since some of these videos were not quality enough to be uploaded raw, with no context, I found that I could use parts of them to tell a brief history of my video making past and Youtube history.  All while casually poking fun at myself and showcase (hopefully) how far I have come with this hobby.  There is a very simple story arc, and it is pretty formulaic.  I did my best to include some in-jokes, satire, and even some Easter eggs for the hardcore viewers.  That said, I made this short film for me first, to test my abilities and branch out with something a little more creative than my typical How-To & Restoration series.  So there you have it, a brief explanation of why this piece of internet media exists.  Leave a comment as I would like to hear your thoughts!

And about that title - Static.  I wanted a one word title that had little or nothing to do with the content.  One could argue there is meaning as there is static present in the analog-to-digital conversion of some of the material presented as magnetic tape and little 1's and 0's don't play as nice as one would like during conversion.
Super Chevy-
A short featurette where a magical car encounters a rouge driver on a deserted highway.
An 8mm stop motion film
About this project:​

This film, and it is truly shot on 8mm film, was done with stop motion animation.  The idea came about after seeing a documentary series called Movie Magic on the old Discovery Channel.  In short the episode dealt with stop motion animation, scale models, the mechanics, some history, and a very basic explanation on how it is done.  When I learned that it was shot frame by frame, much like a traditional camera, and that our own 8mm camera had a button to advance the film one frame at a time just for this purpose, I set out to shoot something in this style.  The concept and thought process was simple.  Find some toy cars that are roughly all the same scale.  Make a road on the driveway using gravel for the landscape on either side, making sure to put enough so it will fill the frame.  Use my Tonka crane with fishing line to suspend the car when it needed to "fly".  Then just start shooting, frame by frame, moving the cars 1/2 inch or so each time.  Very crude, but effective for a 13 year old with no experience or internet to consult on some basic best practices.  Guerrilla film making (if you can call it that) at its finest.

About the title- Super Chevy.  It is pretty simple, the flying car is a 1957 Chevy Bel-Air that can fly, so it is Super.  The car it flies over is a 1987 Chevy Camaro, but that is not integral to the title.