2 stroke oil injection, why the hate? 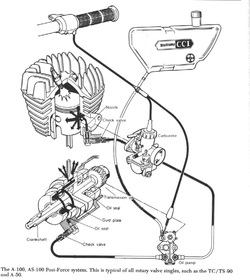 oil injection system that cannot be disabled easily
Back in the day (60's and 70's) when the Japanese started taking over the motorcycle market in a big way in the US, most of the small inexpensive, reliable, street legal bikes were 2 strokes. Most with oil injection, so why the hate now?
For those maybe unfamiliar with engine designs and technology you can Google how a two stroke engine works.  A 4 stroke engine also has camshafts, intake and exhaust valves, as well as some other complex things that are not important to this discussion so I will forgo their mention.

Anyways the stark difference in the oiling system is that with this total loss oiling is that the lubrication (oil) needs to be introduced directly into the cylinder and or the crankcase itself during operation for lubrication and cooling.  I should also note that 2 stroke engines have a separated transmission oil cavity.

The most basic way to achieve proper lubrication is to mix a little bit of oil in with the fuel, this is called premix.  Premix ratios (eg. 40:1) vary by the requirements of the engine for proper lubrication.  This method is fine for stationary engines, OPE (outdoor power equipment), and power sports engines, including watercraft, designed around closed course racing or riding within a short distance of the gas can you have your premix stored in.  Because the fact that you must mix the oil and fuel together in a precise ratio (so much oil per gallon of fuel) it makes it very inconvenient for street ridden motorcycles where fueling up at a gas station as a measuring device and oil would need to be carried by the rider and some math would need to be done at every fill up.

Enter the 2 stroke oil injection system.  An invention to make this whole process of mixing the oil with the fuel automatic so one can just fill up with straight fuel at the pump and be on his/her way, with one caveat, keeping the oil tank full.  For reference a typical oil tank on these bikes holds a little over a quart of 2 stroke specific oil which generally yields over 500 miles of riding.  And there in lies a potential problem, more on this later.  With this invention it allowed cheap and powerful engines to be fitted into street and enduro (dual sport) motorcycles that were easy for the average or beginning motorcyclist to operate, just gas and go, just like a (heavier, lower power per cc, more expensive) 4 stroke motorcycle.

Now fast forward 30-40 years and since 1985  new street legal 2 stroke motorcycles are banned in the US from importation (still available for importation as off road only and street legal under 50cc) people buy these old motorcycles and fix them up to ride and don't necessarily understand the oiling system.  Now it always happens, across forums dedicated to motorcycling/boating for the particular bike/boat that has these systems, someone posts questions about; whether or not to remove the oil injection system on their XXXX <--- insert brand and model here.   And of course people respond both in favor of keeping it and removing it, however the majority seems to lean towards removal with the reasoning that "its unreliable" but not really giving any other evidence to support why it is unreliable, and thus the hate on the oil injection system. 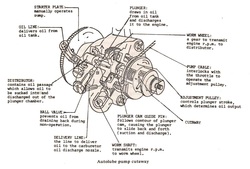 Close up of a typical oil injection pump
(Warning opinion ahead!)  I would like to weigh in why I think the majority of people believe it is unreliable and seem to recommend removing it and switching to premix.  My though is that the unreliability is not with the system itself, it lies with the owner/operator that didn't quite understand how the system was supposed to work and it's requirements to function properly, thus their opinion is "the system is just unreliable, it could not have been any of their shortcomings that cased it to fail!".  Here is my top 4 reasons why I think oil injection gets a bad rap all these years later.  All of these can lead to piston seizes or engine damage.

1.) Early 2 stroke oil was under developed and not specifically designed around injection systems, until later years.  New oils are far superior, even cheapo store brands are better than the oils of the old days.  There are also premix only oils that get incorrectly used in injection systems.

2.) Confusion by new buyers or 1st time motorcycle riders, of what oil to use. Depending on the year or bike some owners manuals either were not clear or specified things like 20W, 30W motor oil as suitable.  This was at a time when straight weight motor oils for cars were even of questionable performance and quality.  This might lead to god knows what could have been run through that system.

3.) The unfamiliarity with the stark differences between what a 2 stroke and 4 stroke engine is by new rider.  The injection was a way to try and take the guess work out of operation of a 2 stroke street legal motorcycle for everyday use.  Just gas and go, and every 500 miles or so top up the oil tank.  That "top up the oil tank" could be easily forgotten as this is something that didn't have to be done when driving a car or 4 stroke motorcycle.  Think about it some of these "new" riders buying larger Japanese enduros and street bikes might have came off of the Honda step through CT90 (a 4 stroke motorcycle) through the You meet the nicest people on a Honda campaign.

4.) Running the tank empty and filling it up and not priming the system.  Most of these systems do not self prime very well and it would be easy to take off and ride 50 miles or more before the system is fully primed and free of any air bubbles in the line, thus some of that time is run with intermittent oil flow through the injection system.

Any one of the above could cause engine damage and thus would be blamed on the injection pump.  I think the misunderstanding of the root cause of the lubrication problem to the engine has caused the perpetuation of the idea that "It is just bad, it causes piston seizures, remove it and switch to premix, at least you know the engine is getting lubrication then." However some motorcycle engine designs (certain makes and models) make it a bit more difficult to just unhook it and run premix because the injection also provides pressurized lubrication for the main bearings that would not normally come from the intake air/fuel charge, but that is a topic for another day.  Now I am not going to sit here and say that the systems don't have failure points, but I think it is more likely a rider will incorrectly mix the wrong ratio of premix (or worse forget to mix) than experience a major system failure.

So my opinion is if the old bike you just bought still has all the oil injection parts intact, adjust it, prime it, use it.  Many people logged thousands of miles on bikes with 2 stroke oil injection and with other proper maintenance have experienced similar longevity to a 4 stroke engine. 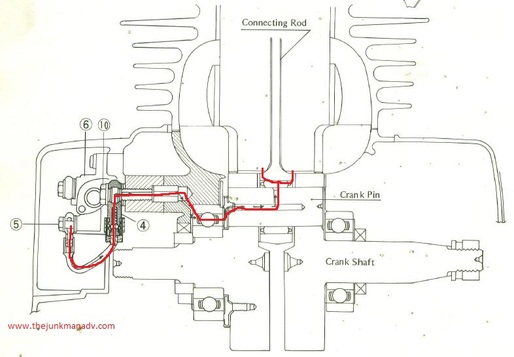 Typical Kawasaki "Injectolube" oiling system, part of the oil goes through the main bearing to lubricate the big end rod bearing, in addition to the oil line to the intake. YOU CANNOT RUN Pre-Mix only in this type of system or bearing damage could result from lack of lubrication.
comments powered by Disqus